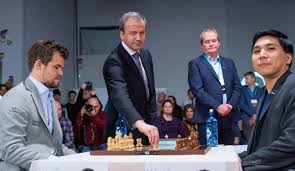 Twenty-six-year old Wesley So, a Filipino chess grandmaster but now representing the United States, defeated the other day world number one Magnus Carlsen of Norway to claim the first ever World Fischer Random (FRC) title in Norway, the latter’s home country. For three days, from October 31, 2019 to November 2, 2019, So overpowered the long-time World Classical Chess Champion Carlsen by a wide margin, 13.5-2.5, from 3 wins in 45-minute rapid, and another win in 15-minute rapid. He did not lose a single game, conceding only 1 draw from each of either time control.

The result was so lopsided the chess world is hard pressed to believe Carlsen could be the battered party in a mismatch. Four of 6 final-day games were not needed to determine the champion.

In 4 previous instances that Carlsen won the world classical chess championship matches, he prevailed over his opponents with moderate to the slimmest of margins. In 2013, at 23, he defeated Vishwanathan Anand of India by three points; in 2014, again against Anand, he won by two; in 2016, against Sergey Karjaking of Russia, he needed tie-breaking games to defend his title; in 2018, Italian-American Fabiano Caruana dragged the match to another standoff, where he eventually lost to Carlsen in the tie-breaking games.

Last year, Carlsen defeated Hikaru Nakamura of the United States in an “unofficial” FRC World Championship match. Before that, since 1996, there had been annual staging (except 1997 up to 2000, and 2011 up to 2017) of similarly unofficial FRC world championship matches. The world’s governing body for chess, Fédération Internationale des Échecs, or FIDE, for the first time sanctioned FRC matches this year, making So’s triumph both historic and official.

The qualifying matches for this year started in April 2019 with online games at Chess.com, which was open to all. From the initial round, 160 players advanced to the next round, where they were pitted against all FIDE titleholders in an 8-round swiss tournament involving 12 groups. The top seven from each group (total of 84) advanced to the next round where, bunched into 16 groups, they competed in a single-elimination tournament. A quarterfinal, from which point those who currently lead the FIDE classical rankings have also emerged as main contenders, then a semifinal (which now shifted to face-to-face, over-the-board, contests in Norway) followed, from which So and Carlsen emerged as finalists. (So actually came from the losers’ bracket, having lost to Nakamura in the quarterfinals.)

FRC is a derivative of standard (or classical) chess, introduced by the American legend Bobby Fischer, who ruled from 1972 to 1975 as the 11th world chess champion. Unlike in standard chess where all pieces and pawns are placed at their traditional positions before the start of every game, FRC chess randomly shuffles the pieces at the back rank for each player at the start of every game. Except for this, most rules of standard chess apply similarly for FRC. There are at most 960 possible starting positions in FRC, compared to only one in standard chess, which is why FRC is also called Chess960. In FRC, the huge number of opening possibilities makes it hard for players to apply variations gained from theory or book knowledge (lately enhanced by powerful chess engines and the wealth of their databases), and are forced to rely on their talent to create devices on the board.

In officially recognizing FRC, FIDE concedes that “Fischer Random tackles a problem in modern chess: since the starting position was always the same, the possibilities in the “opening” phase of the game has been methodically analyzed… Top players spend most of their time analyzing the lines used by their opponent and improving their own arsenal–the best way to respond to their opponent’s usual defenses. This implies memorizing an enormous amount of information. As a result, standard chess games between elite players often follow a line that has been played before, and a ‘novelty’, or a move that has never been used before, does not show up on the board until as late as the 20th or 25th move. Many games are not decided by a move found over the board, but early on, during the preparation for the game.”

Wesley So was born on October 9, 1993 in Bacoor City, Cavite, Philippines. He eventually moved to the United States in 2014, after accepting an athletic scholarship grant from Webster University. His flight from the Philippines was prompted by a variety of reasons, but the most compelling of which appeared to be rather avoidable misunderstandings with sports officials in the Philippines.

In public pronouncements, So has maintained that he is Filipino at heart. Often he could be seen wearing barong tagalog while accepting trophies for the many foreign tournaments that he topped in the past. He has promoted the Filipino brand of excellence at the global stage, at no cost to either the Philippine government or the Filipino taxpayer.

Except probably for Manny Pacquiao, the boxer, and Paeng Nepomuceno, the bowler, no other Filipino athlete has reached the heights of excellence that So did. He is world number one in FRC, compared to Gilas (Men), for example, which is number 31 in world rankings; the Azkals, on the other hand, is number 126 in FIFA rankings.

Contextualizing So’s achievement among the elite athletes of the world should inspire Philippine sports officials to look at chess as both a sport, where Filipino players have shown they can compete anywhere, and a way for training our young to master discipline, patience, rigor, and problem-solving techniques.