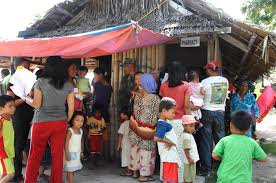 THE presidential adviser on entrepreneurship, Jose Maria “Joey” Concepcion 3rd, whipped up a social media fuss a few days ago. On April 29, 2020, in an online discussion dubbed “We Rise as One,” organized by the Shareholders’ Association of the Philippines, where he was one of the rectors, he suggested that shelved construction projects should now be reopened. And were the construction workers to be left to the mercy of the virus?

That should not bother us, he seemed to have implied. He said: “Maybe because [the poor] are so used to so much exposure that they have a better immunity than us, who are sheltered in a well-protected environment.”

As usual, netizens were quick to react. They called the suggestion rubbish, burgis, unfounded, matapobre, elitista, ill-informed and callous, among other labels.

Concepcion quickly clarified that he meant no offense. In one interview, he said: “There was no way I ever made that statement and it is totally unconnected; why, what did I say…the poor…whatever statement I said, there is no connection. Because everybody has to work, why would I make a statement particularly to one sector to work?”

He said he was quoted totally out of context.

One problem is that it is hard to listen to Concepcion without missing what it is that he is trying to say. I watched parts of the video recording of the “We Rise as One Forum” and heard him throw away lots of brilliant ideas, too dense for my poorly absorbing head that I ended up guessing which one was it. I was reminded of a story I recently read from an email about Albert Einstein who tried to learn golf in the latter part of his life. His coach, Gigi Carnivale, kept yelling at him as the slow-learning Einstein hacked away at the little white ball.

“Keep your head down!”

“Keep your back straight!”

But Einstein just couldn’t get it. Topping off one, completely missing the next, slicing the one after that.

He picked up several balls and whipped them at his instructor!

Carnivale swatted at the balls, ducking and dodging to avoid being pummeled.

“What did you do that for?” cried Carnivale.

The lesson, it seems to me, is that when you teach or preach, make only one point at a time.

I could easily understand that anyone may have quoted him out of context. He probably also needs a spokesman who is good at tying up loose ends.

I thought his context was about easing enhanced community quarantine regulations to allow businesses to reopen and somehow help the economy rise from its current clobbered state. And that should include the construction industry where construction workers, who constitute one of the poorest segments of the workforce, are making a living.

The idea about the poor being more resilient to known human diseases is not new. When the number of states now known as the United States of America was growing, the slaves (later categorized as African-Americans) were enticed to join the army with the possibility of gaining freedom as their reward. Once enlisted, the blacks were sent to the frontlines (that is, ahead of the whites) because, the white masters believed, the colored troopers were immune to diseases, including the dreaded malaria.

The black soldiers eventually earned respect from their masters. The US government went on to assign official regiments for them. The US press conferred on them special titles like “Buffalo Soldiers” and “Immune Regiments.”

They were there when the eagle took its initial imperialist flight. They went to war in Cuba and the Philippines. According to anecdotes that survived the Balangiga (Eastern Samar) massacre in 1901, some colored soldiers empathized with the natives and eventually defected, joining forces with the local “insurgents.”

History teaches us more — how the poor workers and slaves have made the industrial revolution in the West work. Or how the poor have struggled in the Philippines, picking themselves up by the thousands to earn a living overseas. A 2018 Philippine Statistics Authority survey shows that 83 percent of overseas contract workers consisted of clerical support workers, service and sales workers, agricultural, forestry and fishery workers, craft and related trades workers, plant and machine operators and assemblers, and elementary occupations. They come mostly from poor families. Yet their ranks have grown and now comprise a sizable portion of the so-called diaspora surplus that support the local economy, helping it survive threats from external shocks and destabilizing kicks from internal sheltered environments.

In these pandemic times, herd immunity has been discussed as a possible long-term defense against the coronavirus. German Chancellor Angela Merkel, who has a doctorate in physics (thesis in quantum chemistry), early on thought aloud about the numbers and how expansive the disease may take its toll on the population, and cautioned the Germans to brace themselves against it. Other experts think that up to 70 to 80 percent of the population may need to be infected, with around 20 percent of them assumed to be unable to fully recover.

In the Philippines, there is a handy fodder — the poor — who can easily absorb the required 80 million infections for herd immunity to work. Who knows, a million of them may have already been infected and are now immune. But all these are better discussed in private — until Joey Concepcion came along.