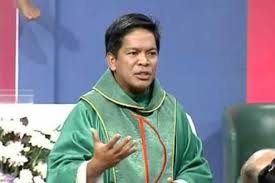 The late Father Fernando Suarez, who was sometimes tagged by media as “healing priest,” opened yet another door for kibitzers to snoop inside the mystery world of forbidden sanctums, eagerly awaiting for the coming of fresh scandals from the Catholic Church. He himself attracted attention not only for his “charisma” and gift of healing, but also for whipping up controversies that one may expect ending up being dramatized in the movies someday. The two words (healing priest) must be locked inside quotation marks, because many, some of them bishops, did not believe him.

Just days before he died on 4 February 2020 from a massive heart failure, Suarez, who would have turned 53 in 3 days, accused the bishops of saying nothing where there was misconduct involving the clergy, and saying lots of things where there was none. He was referring to himself being falsely accused and publicly maligned by the hierarchy, and to the insinuation that nobody was lifting a finger to publicly pin down clerics, who are many, for their wrongdoing.

In a public interview he gave following his acquittal from accusations of sex abuse, he was asked if the bishops were hiding from the public cases of wrongdoing committed by priests. He said bishops are dealing with many of such cases, some of them are publicly known, but they chose to keep them under wraps. He lamented that he was treated differently.

In December of last year, the Vatican, through The Congregation of the Doctrine of Faith, decided on a case brought before it by the National Tribunal of Appeals (NTA) of the Catholic Bishops Conference of the Philippines (CBCP) which accused Fr. Suarez of sexual abuse of two minors. It found no merit to the accusation. On January 6, 2020, the NTA, through retired bishop Antonio Tobias, issued a Decree of Notification conveying the Vatican’s verdict stating, in part, that “[Suarez] has been falsely accused of these crimes and, therefore, nothing now stands [in the way] for him to exercise his healing ministry, provided it is done properly in coordination with the ecclesiastical authority of every ecclesiastical jurisdiction.”

Fr. Suarez conducted healing as part of the Holy Mass, and his being banned to say mass in several dioceses was as controversial as the stories of people being healed miraculously. It appeared that invitations by lay people for him say healing masses wherever they might have been (Fr. Suarez roamed around the world) was enough for him to go there and officiate masses. This was a blatant violation of a church law that requires priest healers to ask “explicit permission” from a bishop before conducting healing Masses in a diocese. In short, Suarez had been belligerent. He insulted persons in authority.

To my layman’s understanding, this specific law is double-edged. While it protects the flock from fake priests, it can also tempt those who wield power to over press, just to show who the boss is. While the church promotes ecumenism, it can be hostile to an undomesticated priest, when pastors of other denominations, at least before the Vatican II, can be considered fake.

Other issues hounded him. Lingayen Bishop Oscar Cruz, one of at least 6 other bishops who banned him, was reported in 2008 to have said that “Suarez’s healing Masses had been ‘open to abuses, like superstition, hysteria, fanaticism, and money.’ The prelate raised questions over Suarez’s selling of rosaries, and other religious articles said to have healing powers… the bishop also cited reports that solicitation letters had been circulating for the construction of Suarez’s healing center in Batangas province.“

Cruz also found the claim that Fr. Suarez was able to resurrect the dead outrageous. The latter, however, would explain that statements like these came from witnesses, not from him.

The irony of what Fr. Suarez thought was his being ganged upon by superiors was that his supposed sins could be hurled similarly against the latter. Years ago a church wedding of a celebrity couple, a supposedly spiritual event that was highlighted by a 7-million worth of cake, featured several bishops and priests. There was no hysteria and fanaticism among the faithful. But I could see them in the clergy. It also reeked of money. Solicitation letters? The bishops tried them before too, one asking for an SUV as a birthday present.

One can also empathize with Fr. Suarez for the pain he endured for years of being rejected by his own flock. But, especially for his followers, it should also console them to know that Jesus, the ultimate healer, was also disowned by his own people. He performed miracles, but some, even those who saw him in person, did not believe him.

A final note: none of what I say about the Church, critical they may sound, should be understood as supporting efforts, in case they exist, to debase it. My wish is for it to reform, rebuild, and further strengthen itself. A review of its canons may help.