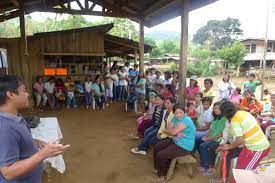 (Admin: Technology of participation was first published by The Manila Times on 4 August 2021)

THERE are several ways of engaging communities in a development process.

The common and traditional way is what I may call as the set-and-forget formula. Every three years, people elect government officials, who then proceed to plan and implement development projects aimed at improving the general welfare of their constituents. People set it once during elections and, bound by an implied “social contract,” leave it all to their elected representatives in government to make things happen for them.

Another way attempts at a more genuine engagement with the people, including those who are at the so-called “margins” of society. This process entails barangay (village) officials calling regular consultative meetings among community members within their respective jurisdictions. Results of these meetings inform the barangay development councils (BDCs), whose membership includes members of the sangguniang barangay (barangay council), representatives of nongovernmental organizations operating in the barangay, and a representative of the congressman or congresswoman, among others.

In theory, all Build, Build, Build projects should have been identified, discussed and prioritized at the community level. This bottom-up process of managing security, social and economic development was in fact sought to have been institutionalized 20 years ago with the enactment of the Local Government Code (LGC) in 1991.

The problem with the LGC-enhanced development process is that it is prone to prostitution, filtering and pilferage. Many things happen from the time a farmer raises his concern about low returns for his labor (he is not even asking for aid) to the time national government adopts its investment priorities. Often, the dysfunction happens at the national level. Like prostitutes, congresspeople filter the priority projects adopted at the barangay level with their own agenda for personal gains. Worse, some pilfer them as their own and use fake organizations to manage them. Such is the lesson we learned from the Napoles pork barrel scam.

Lack of people participation in development planning often results in defective projects from the viewpoint of relevance and impact (such as infrastructure projects, including farm to market roads, that benefit the rich more than the poor), technical and environmental feasibility (such as the Bataan Nuclear Power Plant, the Manila Bay Dolomite Beach, mining and logging permits, dams, concrete sea walls or river embankments, etc), and economic and financial returns (e.g. ZTE national broadband network project).

In my 30s and 40s (I am now 61), I experienced how community processes are facilitated at the barangay level. As executive aide of then Eastern Samar governor Lutgardo Barbo (who is credited for – among other achievements – having ended the communist insurgency in that province during his term from 1991 to 1998), I was part of a team that coordinated the national government functions that had been devolved to local governments pursuant to the LGC.

Being radically new at the time, many local government units (LGUs) were at a loss on how to implement the provisions of the Code. They were supposed to be beneficiaries of the law, but many LGU officials complained about the new responsibilities imposed on them and hated its author, Sen. Aquilino Pimentel Jr. for an idea that involved systems that were not up to it yet. Even now, I doubt if Congress members bother, even just for the sake of complying with the LGC, to send their representatives to BDC meetings.

Engaging communities through Technology of Participation

I also had an opportunity to help teams facilitate community processes for projects that aimed to reduce poverty, empower communities and protect the environment. These projects included the interagency community-based resource management project, the bottom-up budgeting by the Department of the Interior and Local Government and the Kapit-Bisig Laban sa Kahirapan-Comprehensive and Integrated Delivery of Social Services (Kalahi-Cidss) project of the Department of Social Welfare and Development. Bills are now pending in congress that seek to institutionalize and scale up Kalahi-Cidss, now rebranded as the National Community-Driven Development Program.

Technology of participation, or ToP – developed by the Institute of Cultural Affairs – consisting of customizable structured methods is a popular tool applied by community development facilitators. It helps community members to think, talk and work together. The approach “enables people to actively create and participate in the changes that affect them – in their own lives; in their groups, teams and organizations; and in their communities and societies.”

ToP workshop methods enhance participation “all the way from the initial brainstorm to the final statement of consensus. They spark creative solutions and breakthrough strategies. Through surfacing of diverse perspectives and using questions to guide an open inquiry, groups are able to form ideas.

“They engage participants in ways that lead to genuine commitment. When people contribute their own ideas, they make a commitment to them in ways they do not when ideas are handed to them. The emphasis is on realistic plans that ensure the strategies, plans and decisions are implemented.”

Whatever the method, the key is to guide people so that they are able to see and accept the development issues around them as their own. That way they are committed to helping the development projects meant to address those issues become sustainable over the long term.

Next year, the so-called Mandanas ruling will take effect. This means the internal revenue allotment for LGUs will increase by 55 percent. It is an opportunity for these LGUs to push development projects that truly impact positively on the lives of the poor.

From my experience in facilitating community workshops, I noted that people from the fringes of society prefer, as a matter of priority, livelihood projects and training programs over infrastructure investments. The proposition is that the less people are involved in development planning, the more desirable infrastructure projects become.

When LGUs become richer by several millions of pesos next year, we can assume by how much or how little they apply participatory approaches with the kind of projects they fund and implement. Infrastructure projects are desirable from the politicians’ perspective not only because templates abound with which to amass ill-gotten wealth from them, but also because voters tend to favor those who bring in those easy-to-see accomplishments. In such a case, who are we to question the merits of the set-and-forget approach to development?