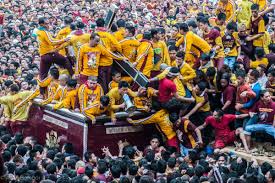 THIS year’s Traslacion, relived just days ago, was probably the most orderly in recent years, as indicated, for example, in 1) the relatively short time (16 hours) it took the procession to “transport” the Black Nazarene from the Luneta Grandstand at the Rizal Park in Manila to its home (Minor Basilica of the Black Nazarene) at the St. John the Baptist Parish in Quiapo, also in Manila; and 2) in the fewer reports of injured devotees.

This year’s route, which saw a deviation from the usual westward transverse points of Sta. Cruz Bridge/Jones Bridge to the eastward Ayala Bridge, covered a distance of about 10 to 11 kilometers.

I think Msgr. Hernando “Ding” Coronel, the new rector of the parish, deserves commendation for being an effective manager. He appeared to be on top of the situation from day one of the event’s preparations, to the three-day run-up of the procession in which the image was displayed at the Luneta Grandstand for the traditional “pahalik,” to the eve of the procession, highlighted by the Holy Mass that ended with a message from outgoing Manila Archbishop Antonio Cardinal Tagle (he was the celebrant in 2019), and finally up to the point the procession reached its destination in the evening of Jan. 9, 2020. Each part of the whole activity attracts waves upon waves of devotees, and some of them are distinct from the other (this year, for example, I could only join the Holy Mass, unlike last year when I was able to join the crowd that covered a short portion of the procession). As in previous years, the sea of people that forms part of the Traslacion, from start to finish, could easily number a million souls, and one can also easily imagine how challenging it could be to manage an event like this.

The good monsignor, who has a doctorate in leadership studies, major in public management from the Ateneo de Manila University, must have succeeded in convincing stakeholders to make sure that some science would go into the planning process as well as into the actual implementation of the plan itself. Also, the huge amount of coordination work it required, involving various organizations in both the government and private sectors, is easy to see but hard to carry out. Coping with the magnitude of the task is such that it can be expected to succeed only when left to experts, and of course with the guiding miraculous hand of the Nazarene.

The participation of the police in helping ensure that the whole footfest is kept orderly and free from possible terrorist attack was unprecedented in terms of the number of warm bodies (reports say at least 13,000) that sort of reined the herd in. Some of them alternated in forming a 2,000-strong “Andas Wall” to facilitate the free flow of the procession. Not all, however, were pleased with this organizational novelty. Some devotees complained that they were unable to come close enough to the image, unlike in previous years.

And probably because it significantly changed the way they expressed their devotion to the Nazarene, they ended up feeling like something was missing in their spiritual, or at least their emotional, experience.

I am not sure that braving the perils that come with snaking one’s way in the middle of a thick and bursting traffic, and sometimes above the shoulders of a throng, just to be able to touch the black image, is what it should take to find a certain level of spiritual fulfillment in the Traslacion. Just thinking about hazing where broken bones, if not shortened lives, are what it takes for social norms to submit to fraternity alliances, I cannot judge where such a masochistic devotion stands in the moral spectrum.

But I do wish to venture into an idea where, instead of making it difficult for devotees to worship the Lord with their physical touch (Jesus himself performed miracles with the help of mortals — like asking the blind to put clay on his condemned eyes when he could cure him even without props, or when he multiplied five loaves of bread when he could have fed millions with nothing but air, etc.), we make it easy for millions to touch the image during the procession. Instead of the hijos helping “devotees clamber up onto the andas to briefly touch the icon’s cross, and wipe the image with cloths tossed at them,” why not provide them free and open access to the andas instead?

I am sure that piles upon piles of time, space and motion studies for the Traslacion are in the sexton’s archives (although unknown to the public). This is probably a good time to revisit them.

For the andas, my idea requires a 12×12 truck or bigger, with custom-built wings and tail wide enough to serve as boarding and deboarding platform for easy entry and exit of devotees. The Nazarene and the cross itself would be protected by fitted bars strong enough to withstand an earthquake.

Crowd control can focus on the flow of traffic. In a dense crowd such as that of the Traslacion, each person occupies 2.5 square feet of space. The Rizal Park and its surrounding areas measure around 58 hectares, enough, when filled to the brim, to accommodate 3 million devotees. If we assume that the customized andas is able to take 15 devotees every 3 seconds, at least 18,000 devotees will be able to clamber up to the andas in one hour, or 270,000 in 15 hours.

Some devotees are fine with just waving at the icon with their white hankies. In my case, the high point was the Holy Mass. This should leave the organizers with making sure the 270,000 or so are more fulfilled in their devotion.