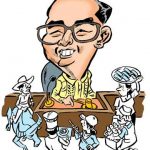 The dream for a people’s congress is on. Those who believe there is need to shake the status quo–not with arms but simply by signing up (you will find the sign-up link at the end of this long love letter)–may find it worth the time to continue reading…

The system of representation in government

The 1987 Constitution, like the older versions that preceded it, provides for a system of representation in the form and structure of government. Section 1, Article 2, of that Constitution says: “The Philippines is a democratic and republican State. Sovereignty resides in the people and all government authority emanates from them.”

To carry out the democratic and republican agenda, three branches of government exist: the executive, the legislative, and the judiciary. The sovereign constituency, comprising of all citizens of the country, elects its representatives in Congress (House of Representatives and the Senate), which functions as legislature, as well as the President and Vice President. The President controls the executive department and, with support from subordinates, it is under his or her command that commission or omission of all activities of government falling under the executive department is undertaken. The President also appoints members of the judiciary.

Through the operations of these basic structures of government, the people, as the body that comprises the sovereign State, expects the protection and promotion of their interests.

The executive and legislative structures that exist at the national level also exist, with a slightly different configuration, at the provincial, city, and municipal levels.

At the barangay level (the smallest political unit), policy making is done at the barangay assembly or through people’s representatives that constitute local policy-making bodies such as development councils, peace and order councils, etc. and the Sangguniang Barangay.

Book 3, Chapters 3 and 4 of the Local Government Code of 1991, provides for the powers and duties of the Punong Barangay and Sangguniang Barangay.

Unlike policy and law making at the national level for which people’s representatives are responsible, let it be emphasized that the people can directly participate in collective decision making at the barangay level through the barangay assembly. Chapter 6, Book 3, of the Code is worth citing in full:

Indications of failure of representation in government

Over the years, flaws in the way government represents the people, especially the poor, have reached desperately frustrating levels. The checks and balances that are supposed to spring from having established co-equal branches of government are at best inhibited. The resulting lack of accountability among duty bearers has become manifest. Corruption in government continues to get in the way of the poor being recipients of social and economic services and of the just application of laws.

Below are examples of obvious flaws in the country’s existing system of representation in government. They pervade in all branches of government, including local government units (LGUs).