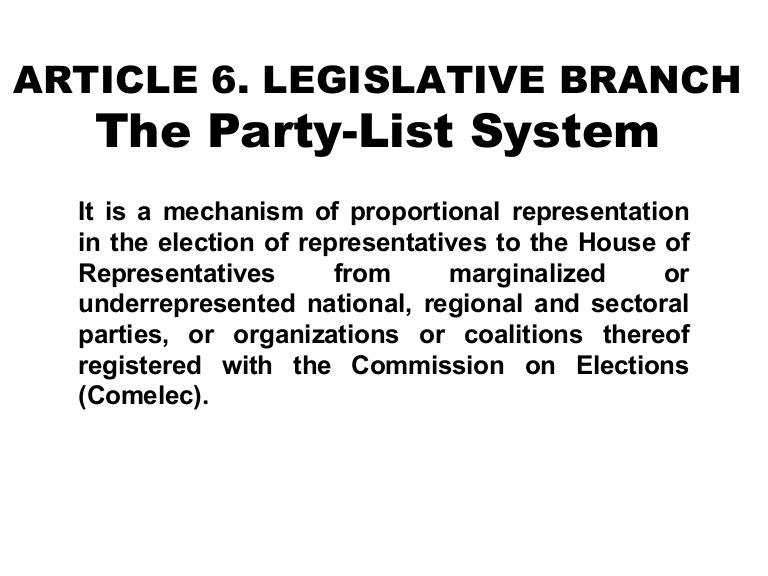 The current Charter change (Cha-cha) fire was ignited when the President, per Senate President Tito Sotto, voiced his desire to abolish the party-list system and, as an aside, amend the Constitution’s nationalistic provisions. Yet, the House of Representatives brewed only the aside.

Let me however focus on the President’s target. The framers borrowed the party-list idea from the parliaments of Europe and embedded it into our presidential system with the noble intent of giving the marginalized and underrepresented a better chance to be members of the House.

Nonetheless, other than saying that the party-list shall constitute 20 percent of the House’s total membership and that for three consecutive terms one-half of the seats shall be filled by the marginalized, the Charter did not clearly define what this political mongrel was.

It left that job to Congress, which obliged by passing the Party-list Law (Republic Act No. 7941). However, the law complicated the constitutional vagueness by limiting the party-list electoral winners only from those that obtained at least 2 percent of the total votes cast for all the party-list candidates.

In its earliest decision on the subject (Veterans v. Comelec, Oct. 6, 2000), the Supreme Court upheld the constitutionality of this 2-percent limitation, explaining that the 20-percent constitutional allocation was merely directory, and not mandatory. Subsequently, Bagong Bayani v. Comelec (June 26, 2001) ruled that only those parties or organizations, and their nominees, who belong to the marginalized and underrepresented sectors were to be deemed elected.

These two early decisions that I wrote for the Court pointed to the textual ambiguities of the Constitution and the Party-list Law, and asked Congress to enact new legislation to redefine and clarify the mongrel. While awaiting congressional action, it limited, via the said two decisions, the party-list winners to only a few seats (about 15). Sadly, Congress did not heed the Court’s call for a new law.

As a result, the dynasties invaded the system, the veteran politicians misused it to circumvent the three-term constitutional limit, the rich owned it as an easy election tool (the richest House member is a party-list rep), and the powerful misrepresented the lowly and weak in Congress. Moreover, the House had to increase its budget by 20 percent more to fund the 61 party-list solons, aside from also increasing the “pork-like” insertions denounced by Sen. Panfilo Lacson.

To justify his bill, Sotto explained that the House would not be able to obtain the three-fourths vote needed to amend the Charter as the President wanted because 61 (20 percent) of its 304 members are party-list reps who would “surely vote against their abolition.”

But even Sotto’s bill will be opposed by the 61 party-lists because it would disqualify most of them. Allied with the ruling supermajority, they vote as a bloc.

Will the President be satisfied by the Sotto bill, given that the party-list solons he wanted to oust would remain in the House because they could surmount the “failures” and requirements prescribed therein?
To close, let me go back to the big question: Party-list, quo vadis (or, in English, where are you going)? With the passage of the Sotto bill, will the expensive mongrel go toward the fulfillment of the noble constitutional intent to give “genuine power” to the powerless? Or, with the President’s burning desire for its abolition, will it go to its fiery end? Or without Cha-cha and without a new law, will it go nowhere and just bask in the status quo? Abangan.
——————
Comments to [email protected]

Don’t miss out on the latest news and information.