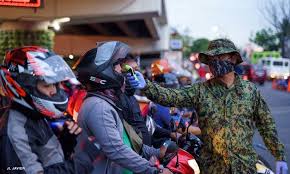 MY neighborhood in an inner barangay (village) of Imus, Cavite has had progress in somehow easing the flow of vehicular traffic (consisting mostly of motorcycles, tricycles and private cars) by applying more self-discipline and relying less on traffic enforcers. I must hasten to mention that this was during pre-coronavirus disease 2019 (Covid-19) times, because with the community quarantine of Metro Manila being enforced, the volume of road traffic in surrounding areas like Cavite has dramatically decreased. (This evokes mixed emotions. We all hate traffic, but freeing ourselves from it must not be at the price of being thoroughly terrorized by a deadly disease.)

For something so small in terms of physical size (all viruses cannot be seen by the naked eye), Covid-19 has shaken the world in ways that gargantuan threats posed in recent years by wars or natural calamities have yet (God forbid) to accomplish. So tiny and, surprisingly, not ugly. “Aesthetically pleasing,” was how the National Institute of Allergy and Infectious Diseases (based in Maryland, USA) described it when it released scanning and transmission electron microscope images of the coronavirus last month.

As this is written, data show that Covid-19 has infected individuals in at least 158 countries and territories worldwide. (A cruise ship — MV Diamond Princess — docked in Yokohama, Japan since Jan. 20, 2020, reported a total of 696 cases from close to 4,000 guests and crew, 538 of whom were Filipinos. Seven have since then been reported to have died.)

Twelve countries with more cases than the Philippines (Malaysia, with the highest at 566, and Chile, with the lowest at 156) have no reported deaths yet.

What the above figures tell us is that we are in a dire situation. Compared to other countries, we are less successful in containing the virus.

This compels us to all the more follow what the authorities are telling us to do. At the same time, government needs to communicate effectively. The public cannot interpret government messages in many, sometimes conflicting, ways — especially for those who are carrying out orders in the field.

Monday night was an example, where some people trying to leave Metro Manila were left stranded for hours because President Rodrigo Duterte had earlier announced on TV the immediate enforcement of an “enhanced community quarantine” for the entire island of Luzon.

Duterte himself must know how to address his countrymen on matters as urgent as this one. (He cannot seem to make a speech about one that impacts on all aspects of human existence different from one delivered before an alumni gathering.) An obvious defect of his enhanced community quarantine declaration was its unnecessary length and fluffy content. He mentioned about the need to follow government orders several times, risking the odds that his listeners could end up not knowing which orders to follow. He even cursed Covid-19 — “Yawang virus” — which, from a purely public health emergency messaging perspective, adds zero value at all. Laughter can be the best medicine — if he was trying to make light of serious threat — but the audience needs to focus on the heart of the message. It is not about the off-the-cuff repartee, no matter how his fans have learned to anticipate them; it is about getting the meat of his message across. He needs to learn from what jeepney drivers do to spare his potential riders from confusion on where the route is headed: one by one he peels away the karatola that is no longer needed.

But I also noticed that the President’s address was an improvement over the one he made earlier, where he was flanked by many other government officials, with men in uniform occupying an entire row of seats at his back. (In contrast, most other world leaders who addressed their countrymen on the matter have appeared on TV by their lonesome.) Duterte’s non-verbal language may have suggested that Filipinos are unruly and can be governed only by force.

This brings me back to what had seemed to be working fine in Cavite (I’m sure this is happening in many other areas as well). What the motorists do is to collectively accept, without any formal agreement or consensus, the manner of appropriating right of way. Anyone who has closest access to an open lane crosses the intersection first. The others yield. This generally results in a relatively free flow of traffic and the time (parts of a second) it took for one lane to move after the other — which happens when intersections are manned by traffic enforcers — would be saved.

If we had enough culture, issues about enforcing checkpoints at boundaries between Metro Manila and suburbs should be non-existent. Informed of the whats, the whys, the wheres and the hows of Covid-19, people would, on their own, isolate themselves and avoid, to the limits of the possible and doable, public places. If we had enough culture, people would rush to the aid of people being displaced by the imperatives of this public health emergency, especially those who attend to the needs of patients and those, on a larger scale, who risk losing their livelihood.

That way, people and government are able to focus on matters that really matter. We are able to free up resources for emergency response and, in keeping with the ends of sustainable development, for early recovery that leads, down the road, to social leveling. During these trying times, relief goods for the poor and bridge financing for companies that are being hit hard by the government-imposed community quarantine within Metro Manila should be at the top of government’s immediate agenda.