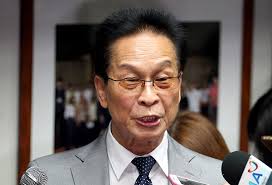 My love for you is obvious, says an Air Supply song, that even a fool would know.

The government’s resolve to clean government, kill criminality and move the country to first world status is clear as daylight, suggests the satisfaction rating surveys, that Sal Panelo’s brilliant paternosters are easily understood even when you mute the TV he is on. His face has a language of its own and— especially for his fans like me—it is enough.

If at times there seems to be contradiction between what he says and what his boss—President Rodrigo Duterte—says, it should not be for lack of clarity. I suppose it must be about context.

Mr. Duterte has made it look like methods that debase established social norms are what we need to move the country forward. Operating within a constitutional framework that came to life when the rule of a dictator died, one that makes it hard for another dictator to resurface, Duterte on at least one occasion publicly trash-talked the supreme law of the land, citing its dubious worth of being less than equal to a toilet paper.

These extra-legal methods invite questions. The administration’s response to those who oppose them are varied. For the political opposition, an appointee was uprooted from the Supreme Court, a Senator was relocated from the session hall to a detention cell, while another former Senator is a Judas away from incarceration. Duterte himself has shown his hands-on approach to dealing with real or perceived killjoys and destabilizers. He threatens people in government, such as State Auditors, with physical harm for the delays they cause in the delivery of government services. He peppers the hierarchy of the Catholic Church, among others, with insults for making noises out of the drug war summary killings that victimized mostly the poor.

In short, Duterte’s context is about making his government popular. He may or may not have a genuine concern for the people. But he needs to stay in office. After all, the power his office grants is what can facilitate the changes he wants to happen. The more he trash talks, sow terror in the minds of criminals, and see dead bodies in crime infested communities, the more likely it is for him to enjoy high trust ratings.

(At this point, one may wonder if ours is a generation that has lost its moral sensitivity, if not the urge to figure out what happens next when mechanisms for check and balance in government have been decapitated. But that’s another story.)

Panelo’s context, on the other hand, is to reconcile the conflicting standards of the ideal and of what is necessary under the current scheme of things. Although thousands have been killed in the government’s war on drugs, Panelo does not seem inclined to highlight this accomplishment, possibly braving howls of protests from legions who continue to express support to the government. He is probably a damper, creating a buffer zone for a possible shift of sentiment in the future when one day a kid in his innocence will tell the emperor that he is naked.

Whenever he is asked to comment on insinuations that government fights criminality with the methods of a criminal, the standard reply has been an amazing display of both verbal and non-verbal communication. He contorts the movable parts of his face, then proceeds to convey in magical ways his truth: “Drug-related killings are absolutely not state-initiated nor state-sponsored.”

There was this story about a young Duterte, taking up law at the San Beda, who shot a fellow student for making fun of his Tagalog. (The school investigated the incident. Rene Saguisag, who as student council representative was part of the investigating panel, recalled that nobody recommended the expulsion of the pistol-packing bandit except himself. The Benedictine priests did not have the heart, Saguisag seems to suggest, to see Rodrigo go. By hindsight though, I think they had had the foresight to position their school in the company of the elite institutions from where Philippine presidents had emerged.)

That anecdote came to mind because of Panelo’s heroic display of illumination, yet again, the other day.

Duterte, in a speech before a crowd of VIPs he just appointed to various government posts, digressed to something that amounted to be just another day in the office. He kind of bragged about how he masterminded the ambush of a mayor he previously tagged as narco-general. His words: “Loot, p—mo, nanalo pa na mayor. Inambush kita, animal ka, buhay pa rin!”

Panelo felt the need to explain for the boss. There was confusion, he said, over the President’s Bisaya way of talking since “he is not proficient in Filipino… What the President intended to say was: ‘Inambush ka na, buhay ka pa’ …”

Unmuted, sometimes Panelo makes it sound like tales are so tall that even a fool would know the spox is fooling himself.