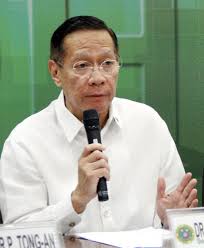 HEALTH Secretary Francisco Duque 3rd is to gecko as Vulcaseal is to glue. He clings to his post with the tenacity of a skin disease (to borrow the words of Jose Rizal in Noli Me Tangere).

That is the impression he projects if one is to look at how the Department of Health (DoH) he heads performed in the fight against the coronavirus disease of 2019 (Covid-19). The case for him to step down and let somebody else do the job is pressing. Yet he braves on like the sticky cockroach that survived Nagasaki and Hiroshima. The other day (April 16, 2020), no less than 14 senators of the republic publicly rated his performance and, finding him wanting, called for his resignation.

The senators cited, among other failings, “Duque’s earlier reluctance to ban travel to and from China, his failure to stock up on test kits and personal protective equipment and his failure to facilitate the accreditation of testing centers for the coronavirus as seen in the delayed inspection of the one in Marikina City.”

They added that “Duque’s failures led to ‘poor planning, delayed response, lack of transparency, and misguided and flip-flopping policies and measures in addressing the Covid-19 pandemic that endangered and continues to endanger the lives of our health care professionals, other frontliners and the Filipino people’.”

Often, of course, the most convenient escape when things go wrong is to blame somebody. The emergency response to Covid-19 pandemic has several components. Success or failure in the Covid fight cannot be attributed to one man or woman or anyone of the government agencies manning the frontlines. Aside from the health component, there are equally compelling concerns about the economy, about the bridge support for the most vulnerable members of society and about keeping order in communities. Ineffective quarantine regulations that hardly help arrest the spread of the disease unnecessarily tax the capacity of the health care system. Consequently, overtaxing an already deficient health care system further adds menacing flare to the contagion.

Yet, for purposes of overall assessment, emergency response activities in all fronts are still dependent on how well the health care system is coping. The Health department is the lever that keeps the whole defense apparatus turning in one direction. If it fails, the entire device fails.

The Philippines lags in positive indicators — coming in next to last in rate of recovery and six of 10 in mass testing. On the other hand, the country leads in negative indicators — number one in death rate and 4 out of 10 in number of cases.

The DoH is directly responsible for how well or how bad we performed in all indicators except in spread and/or transmission of the virus, which can be attributed to how well or how bad we implemented quarantine procedures, starting with a ban of foreign travel. Indeed, all Covid-19 problems are rooted in the failure to close the gates for inbound travelers, and for adequate isolation and treatment for all transients who were exempted from the travel ban.

The fight is not lost, however. Glimmers of hope are flashing on the horizon.

From a purely clinical perspective, we can even say that the Philippines is getting close to winning this fight (although many would quickly add that not as quickly and decisively as other countries have done it). The second table shows that except for the United States, most countries have in fact started to flatten the death rate curve, so to speak, including hard-hit European countries, such as Italy, France and Spain. China appears to be an odd entry here, but that is just because it recently rectified its data.

Everyone needs to be warned, though, that this fight is bound to go the distance, as it were, along with the fight for truth.

The Chinese and their kind freely entered and exited the country even while the quarantine lock was on. Just days ago, a Chinese-manned vessel docked in Homonhon, Eastern Samar, to load chromite ore mined from the island.

Why the annexation of the Philippines by China has happened without Filipinos — except probably one or two — knowing it is as mysterious as the search for the cure of Covid-19. For the moment, however, these are all beside the point. Ours is not to reason why, ours is to do and die, according to Alfred Tennyson.

P.S. My full name is Hermilando “Ingming” Duque Aberia. I am indebted to my parents who gave me not only life, but also the opportunity to earn for myself an immortal soul and, hopefully, an immortal name.