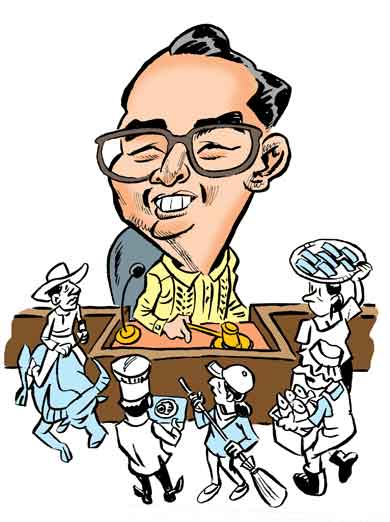 THE House of Representatives, led by Speaker Alan Peter Cayetano, is getting bolder. The plenary session it recently conducted in Batangas City was the first of its kind in the history of the legislature.

I am not sure if being close to a disaster area, or hearing the stories of those who have been displaced by the Jan. 12, 2020 Taal Volcano eruption, could significantly contribute to the quality and speed up the process of lawmaking. I do recall that the late Fr. Jack Carroll, SJ, who used to be invited by senators as a resource person during some of the latter’s orientation workshops (he was then our boss at the Institute of Church and Social Issues, now named John Carroll Institute of Church and Social Issues), once told us about instances when he suggested to the senators about holding their workshops at Payatas, also known as the dump estates in Quezon City, instead of having them in five-star hotels.

We may also recall that then-President Fidel Ramos brought some of his cabinet meetings to a number of out-of-town sorties, sometimes in otherwise forsaken parts of the country, right in the middle of where government action was supposed to be.

The point, it seems, is to drive home the message that government does empathize with its constituents, never mind the hecklers like one in social media who commented that what Cayetano and his battalion of deputies did was nothing more than a political stunt. The speaker himself has said that what happened was “done for symbolic reasons and out of the lawmakers’ compassion for the eruption victims.”

Thus, whatever the legislators accomplished in Batangas City (reports said that about a hundred representatives [out of 300] — quite a feat, incidentally, for these honorable men and women who have been known to struggle with achieving a quorum — have passed on second reading House Bill 5989, titled “An Act Creating the Department of Disaster Resilience”) was a bonus.
We can argue, of course, that what the House can do anywhere what can be done at its home in Quezon City, at less cost to the taxpayer. Besides, anything good that may come out of these innovations, worthy of critical reviews they may be, is forever suspect. It fuels the perception that a politician’s agenda is driven by an element of grandstanding, all set to hoodwink its publics, like hyenas and vultures to a carcass, or predator to prey.

I nag about the cost because Cayetano’s Congress has shown how it has taken its spending to such unprecedented levels that taxpayers would do well to raise a point of order. It elected 37 deputy speakers — a record of sorts — and, for this year, imposed an additional budget of P1.6 billion. Last month, in keeping with the gift-giving cheer of Christmas, it disbursed to each of its personnel a bonus of P150,000 — also a record.

How bold Cayetano has become can be fodder for a broader brainstorming. Hints dropped by his Batangas foray and the need to bring government closer to the people leads us closer to an idea for which I proposed in an earlier column the establishment of a People’s Congress (“Visualizing a people’s congress,” July 10, 2019).

In that essay, I argued that with today’s technology, the system of representation could bring ordinary citizens to the front, alongside the traditional elites of society.

In a people’s congress, all qualified voters can be legislators. Anyone can propose public policy with effects as potent as a law, provided he or she gets the support of majority of voters.

This congress shall be administered by a people’s secretariat, which shall operate a fully encrypted web-based digital platform, powered by alternating servers, that can host up to 100 committee meetings simultaneously. To be able to join these meetings, a voter needs to sign up first, then log in afterwards, using his or her Commission on Elections credentials. The design of the website should be such that users will have easy access to committee “rooms” where they feel their interests will be best addressed; its functionalities should adequately provide for them to present their arguments for or against any pending legislative proposal; and that user feedback is ranked according to the number of “likers” or supporters.

The people’s initiative contemplated under the current constitution shall become the default process by which all legislative proposals will be submitted for review, debate and approval, without need for the required number of signatures.

Existing rules on congressional protocols such as conduct of committee meetings and plenary sessions shall, as far as practicable, be applied and maintained. Quorum — defined here as a simple majority of all registered users — shall be necessary for the following cases: final approval of a bill, impeachment verdicts, and ratification of international treaties. A legislative proposal shall have one year within which to secure the required majority vote; otherwise it relapses into a fresh bill and shall undergo another process of review, debate and amendments.

For obvious reasons, no user can have multiple accounts. One user equals one vote.

When this happens, we can say goodbye to the honorable men and women in Congress and taxpayers can save up to P26 billion — this year’s budget for Congress — on the spot.