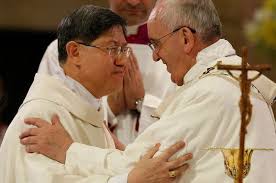 A teary-eyed Luis Antonio Cardinal Tagle acknowledged the applause from the faithful in a noonday concelebrated mass where he was the main presider at the Manila Cathedral on Monday, 9 December 2019. The emotional moment came towards the end of the mass, when His Eminence, Gabriele Giordano Caccia, the outgoing Papal Nuncio to the Philippines, announced that Cardinal Tagle has humbly accepted a new role that will require him to say goodbye to his flock in the Archdiocese of Manila.

On Sunday, December 8, the Vatican has announced that Pope Francis had appointed Cardinal Tagle to the prefecture of the Congregation for the Evangelization of Peoples. Also known by its former title, the Sacred Congregation for the Propagation of the Faith (Latin: Sacra Congregatio de Propaganda Fide), or simply the Propaganda Fide, the position is of high consequence to mapping the strategic path of the Holy See, being mainly responsible for the Vatican’s missionary work and related activities.

Propaganda Fide was founded by Pope Gregory XV in 1622 to arrange missionary work on behalf of the various religious institutions. It is one of the nine congregations of the Roman Curia, also referred to as the Pope’s cabinet. Its main task is to promote the spread of Catholicism around the world, and is also responsible for “the regulation of Catholic ecclesiastical affairs in non-Catholic countries.” The importance of the Prefect’s duties as well as the broad scope of his authority and territorial jurisdiction have prompted observers to call him as the “Red Pope,” in reference to his almost absolute authority over mission territories for Catholicism.

In the case of Cardinal Tagle in particular, some have noted how his stature as “papabile” has been growing over the past few years. Vatican veteran Analyst John Allen, writing for cruxnow.com, suggested that the appointment “could boost the Asian prelate’s chances of perhaps someday becoming pontiff himself.” In 2013, Allen said something about the Cardinal: “Tagle is a gifted communicator, making him a sought-after speaker and media personality. He drew rave reviews for his performance at the 2008 International Eucharistic Congress in Quebec, where observers say he brought an entire stadium to tears.”

In a world wracked by all forms of social injustice—killing of the poor and defenseless, including the unborn; denial of workers of their just wages and all forms of deprivations that dehumanize the poor; of the environment being defiled, etc.—Cardinal Tagle should at once recognize the daunting task confronting him. Promotion of social justice and responding to the call of mercy, compassion, and love for others—especially those who are incapable of loving back, the wretched, the condemned—are key cornerstones of the Catholic faith. His role may not need herding people inside places of worship; religious conversion is relatively easy, although the history of the church is blighted by spasmodic waves of violence, by atrocities of missionary wars and conflicts that claimed lives of millions.

But what can be more challenging is conversion in the way peoples’ lives are lived, in accordance with the guiding light of the Catholic faith, which to most believers is the one and only way of following the Father’s will.

Promoting the Catholic faith is therefore never easy. Rejection of the Father’s Will, after all, has ruled the day since the time of creation.

In his homily during the Mass (a celebration of the Solemnity of the Immaculate Conception), Cardinal Tagle expounded on how Mary, mother of Jesus, the Christ, chose to say yes to the Father in the middle of her confusion, anxiety and fear. Mary symbolized faith in and obedience to God. He contrasted this to the time the serpent deceived the figurative Adam and Eve, who said no and rejected God’s command.

Today, rejection of the Father’s will comes in various expressions and forms. But the point of belligerence remains one and the same: there are other gods aside from Him. These other gods are compelling enough for us to forget the one who truly reigns.

Cardinal Tagle talked about this in a 2008 speech which Allen wrote about in 2013. Contrasting Christian worship with false forms of adoration, he said:

His new appointment will bring Cardinal Tagle to Rome, away from his hometown in the Philippines. But his mission can start, and may find more meaning, in the real conversion of faith among fellow Filipinos, some of whom may have cheered him on last Monday.