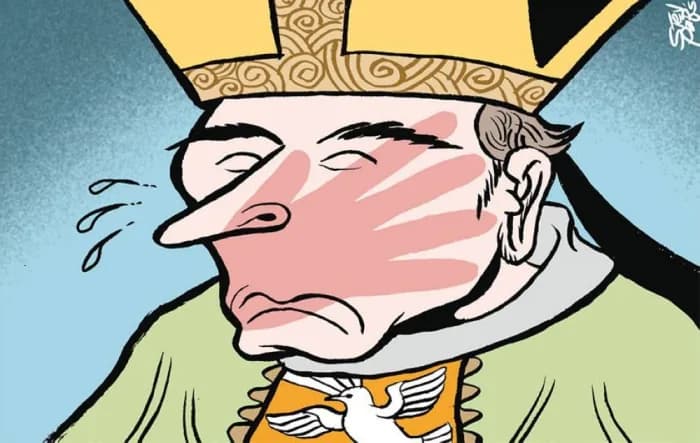 This article “A slap in the face” was also published by The Manila Times on 6 June 2022.

For fun (to spectators) and money (for competitors) there is a sports competition in Russia called “Slap Championships,” and another one in Arizona, USA, called “Rage in The Cage Face Slapping Championships.” Competitors stand across each other and at intervals one slaps the cheek of the other with open palms. Ways of winning include a knockout or technical knockout (when an opponent cannot continue), points advantage, or disqualification.

I think many will agree that this competition, with barely the capacity to take blows as the measure for success, is somewhat senseless. I doubt if people can see any message of value from such a misplaced use of talent. This otherwise novel exercise in generating entertainment expresses a vulgar language; perhaps its being a slang for a regimen that may lead to physical fitness can be its sole redeeming feature. (But while at this, I must also add however that many sports and games, like boxing—also known as the “manly” art of murder—are senseless and stupid.)

Apart from that, the only real slapping event that I have ever known is the one that Will Smith smacked Chris Rock with at the Oscar’s in California, USA, some months ago. This, too, going by comments from many observers, was senseless and stupid. 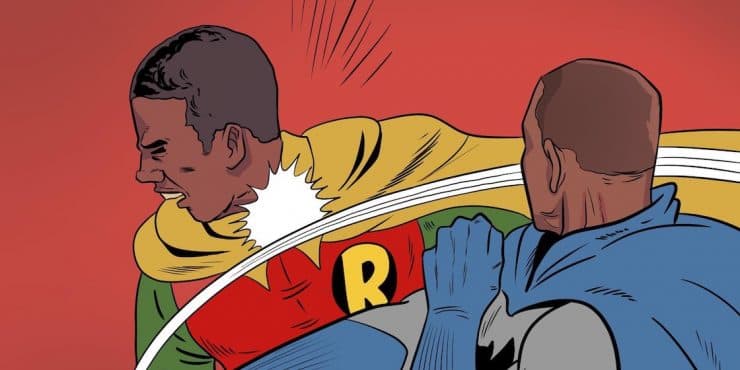 In the movies, I have seen other varieties of slapping. Those riveting scenes conveyed messages that evoked extreme emotions—of hate, of desperation, and maybe even love. On the one hand, there is the urge to show one’s control over another, the display of power, of threat and intimidation, and of the basic expression of lust for highlighting the inferiority of others. On the other hand, there is the language of rebuke, of trying to awaken a loved one from madness, of encouragement, and of learning lessons or rediscovering the truth.

Slapping is by no means a universal language. It conveys a variety of messages, expressed either in literal or figurative senses.

Roman Catholic Bishop Marcelino Antonio Maralit went metaphorical when he said that the result of the last presidential elections was like a slap in the face.

We recall that individuals, groups, even institutions, that are one way or the other associated with the Catholic Church in the country have endorsed candidates, notably then Vice President Leni Robredo, other than eventual winner Ferdinand “Bongbong” Marcos, Jr, for president. The results clearly showed that the catholic flock—comprising an estimated 80 percent of the whole population, with some 65 percent of them being registered voters—ignored their leaders.

Some media outlets have reported that the Marinduque bishop, who also serves as chair of CBCP Episcopal Commission on Social Communication, may have suggested that the hierarchy has lost moral ascendancy. He was quoted as asking “whether we have lost our voice as the hierarchy of the Church…. What happened to our voice? Is it because we’re not that credible anymore?” adding that “sometimes it’s very hard and very painful to ask that question, but credibility when it’s a moral choice is based on your own moral ascendancy.”

Yet this kind of a slap can be an expression of love. Maralit thought that here was an occasion for the leaders to wake up to some realities, suggesting among other things that “maybe we are not speaking the same language… maybe we have already failed them by not listening to them… or that the hierarchy may already be disconnected with our people.”

The slap can help the church rise itself from the dead, as it were. Quoting the good bishop further: “After this, what do we say about the truth? How do we re-educate our people not only about the truth but also about their values? As a Church we really need to re-assess ourselves, especially the leaders and to rise from the ashes.”

Should the hierarchy find it worth their time to hear what the least of the followers may have to say, I wish to volunteer some of my thoughts.

There is confusion among us, the laity, obviously. Even during holy mass, we do not seem to have a common understanding of the language of the liturgy. We have different gestures at several stages of the rites. God surely knows what each of us means when we raise our hands during the praying of Our Father, for example; but for some of us who look as if we are expecting that something will fall from the sky, or for others who look as if we wish to touch the roof of the church, there is this impression that people do not share a common understanding of what is going on. How repetitive have the priests been in reminding us that every muscle we move during mass, especially during the eucharistic rites, is meant to seek forgiveness from each other, to thank and to worship God?

During homily, we hear the usual flair for public speaking. But some are boring, others bordering on entertainment. It seems they seek to draw attention to themselves rather than to the gospel.

People come in shorts and sandals. They can be seen wearing their Sunday’s best outside of the church, inside malls, even in cockpit arenas. We have other Gods in many other places. We worship not only money and power; we yield to lust and pleasure; we madly follow entertainment, like slapfests and boxing.

TO continue with last week’s preaching in this column, I wish to elaborate on what I consider to be the distractions that led the laity to the side of other gods while the music played, if I may borrow the lyrics of a Matt Monro song.

I suspect people have come to worship other gods — where the truth can be sacrificed for convenience, money, power, pleasure, pride, entertainment, etc., and, for victims of disinformation, helped in many cases by biases and ignorance — because there is confusion among us, the laity, as I theorized last week.

The confusion is expressed in many ways. I mentioned as one example the sight of churchgoers dressed in shorts and sandals. This is in contrast to what we see at parties, in the malls, even in cockpit arenas during Sundays. So, where did God’s laws go? In Matthew 22:34-36, Jesus Christ said, in response to a question from a Pharisee on what was the greatest commandment, “Love the Lord your God with all your heart, with all your soul, and with all your mind.” By the symbol of appearance alone, it is hard to say the Church has become a place of worship. It looks like we worship other gods somewhere else.

In an earlier column titled “War over the Body of Christ,” I made some tsismis about the Catholic Church in the United States where a firestorm was ignited by the denial of communion to House Speaker Nancy Pelosi, who is supposed to be a member of the Catholic Church, for publicly supporting pro-abortion advocacies. The Church teaches that abortion is murder; the prohibition against it is equally high in the ranking of God’s basic laws.

Pope Francis apparently frowns on the Pelosi ban. He has been quoted as saying that communion “is not the reward of saints but is the bread of sinners.”

On the other hand, supporters of the Pelosi ban cite Saint Paul who, in 1 Corinthians 11:27-29, said: “Whoever eats the bread or drinks the cup of the Lord unworthily sins against the body and blood of the Lord. A man should examine himself first, only then should he eat of the bread and drink of the cup. He who eats and drinks without recognizing the body eats and drinks a judgment on himself.”

Also, the Code of Canon Law (916) further warns that “a person who is conscious of grave sin is not to celebrate Mass or to receive the Body of the Lord without prior sacramental confession unless a grave reason is present and there is no opportunity to make an act of perfect contrition, including the intention of confessing as soon as possible.”

The examples I mentioned may support another theory that confusion among the laity has its roots in the confusion among the clergy. The compounding effects of the scandals involving the leaders of the Church could have triggered reactions that found the metaphorical expression of voters slapping the Church.

Today’s abuses committed by Church leaders may pale in comparison to yesterday’s corruption that prompted the rise of Protestantism and other breakaway groups, but the writing on the wall has been there for everyone to see long before Marinduque Bishop Marcelino Antonio Maralit conceded being at the receiving end of a slap.

In 2013, a Social Weather Stations (SWS) survey found that about 1 in every 11 Filipino Catholics, or 9.2 percent, thought of leaving the Catholic Church. The survey also found that “compared with members of other denominations, Filipino Catholics were less devout and active in attending church services. Catholics also lagged behind other groups when it comes to attending church services, with only 37 percent saying they go to church every week, a dramatic drop from 64 percent registered in July 1991. The number of weekly churchgoers is higher among Iglesia ni Cristo members (70 percent), Protestants (64 percent) and other Christians (62 percent). Seventy-five percent of Muslims go to the mosque at least weekly.”

The survey followed the observations made by Fr. Joel Tabora, SJ, president of Ateneo de Davao University, who said in a blog post that “the Catholic Church is in trouble — even in Catholic Philippines… People have been leaving the Catholic Church. People are about to leave the Church. It is time, I think, for Mahar Mangahas to take out his social survey tools to help us understand what is happening.”

In another SWS survey conducted about a decade later, the number of Filipinos who believe that religion is “very important” in their lives was found to have gone down “from the record high of 83 percent recorded in December 2019 to 73 percent in November 2020. Most of the decreases in perception of importance are attributed to Christian beliefs, like among Catholics (down from 84 percent to 71 percent), and other Christians (78 percent to 71 percent).”

The voters have slapped the Church with such a humbling effect at least twice already. In the 2016 presidential election, then candidate Rodrigo Duterte cursed the Pope. He won the contest anyway.

Maralit’s candor in suggesting that “the hierarchy may already be disconnected with our people” opens doors for retrospection. That should likewise underscore the cost of disconnect: in a world of lies, people no longer look for the truth in messages coming from among bishops and priests like they used to. Casualties include upholding the sanctity of life and of marriage (between man and woman), as well as the promotion of peace, the protection of the environment and, of course, the defense of the truth, among other core teachings of the Church.

All these digressions from the Catholic faith are happening while people are doing it their way. Away from what the Church teaches as timeless standards of right or wrong. And — just to show what kind of fun it has been — as the Church lost their love, the music played.